It was one thing to drop 38 in a win over Kobe and the Lakers. It was entirely another to take the game in his hands four nights later, on the last possession of the game, as the sell-out crowd at the Air Canada Centre rose to its feet, and win the game with a dramatic three-pointer.

The effect of that treybomb reverberated around the world. As of today, the YouTube video of Lin’s Feb. 14 game winner over the Raptors has been viewed over 5.2 million times.

It wasn’t just that shot. The Knicks were down 3 on the previous possession. Lin made an and-one to tie the game, AND THEN he went and won it with a three-pointer in Jose Calderon’s face. The ACC erupted.

Lin finished the game with 27 points and a career-high 11 assists. This was a day after being named the NBA’s Eastern Conference Player of the Week—in his first week as an NBA starter.

The following day, on The Scott Van Pelt Show on ESPN Radio, Mike Breen discussed Jeremy Lin’s game winner over the Raptors the night before (Breen had called the game for MSG Network).

In his 20 years of calling games, Breen said he’s only seen two other players receive the ovation Lin received on Tuesday by the opponent’s home crowd during pre-game player introductions: Michael Jordan and Kobe Bryant.

And when Lin hit the game winner? “The crowd exploded.” This was an away game.

“I’ve never seen anything like it, in all of my years in the game as a player and as an analyst,” Tim Legler told Van Pelt on Sportscenter Tuesday night. “To do it at this level, and then to top it, night after night, and go higher and higher. This is a guy that had three different teams look at him and not see what we’re seeing right now. It’s just an incredible story.”

“Eventually, (Lin’s performance) will level out at a consistently good level. Right now, it’s absurdly good. The Knicks are rolling; the city of New York is buzzing – it’s great for the league.”

Jeremy Lin and the Knicks lost last night in New Orleans. Leading up to last night’s loss, the Knicks had won 7 straight; 6 in a row with Lin as their starting point guard.

The turnovers are his most glaring weakness. Lin’s game is by no means perfect. “If people are to knit pick: He’s turned the ball over a ton; he still appears unable to go left and he has some defensive liabilities,” said Van Pelt on Wednesday.

I’m not going to make excuses for the kid, but it’s important to note he’s essentially a rookie (rookies tend to turn the ball over) and plays in the D’Antoni system (Steve Nash also had high turnover numbers under D’Antoni). And really, the Knicks are 8-1 with him starting, regardless of the turnovers.

Linsanity by the numbers

If we’re gonna talk records, let’s talk about this one: After Tuesday night’s win over the Raptors, Lin scored 136 points in his first five NBA starts, surpassing Shaquille O’Neal (who had 129 in 1992) with the most points scored in a players first five NBA starts since the ABA-NBA merger in 1976.

Some other interesting Lin highlights from the past week: 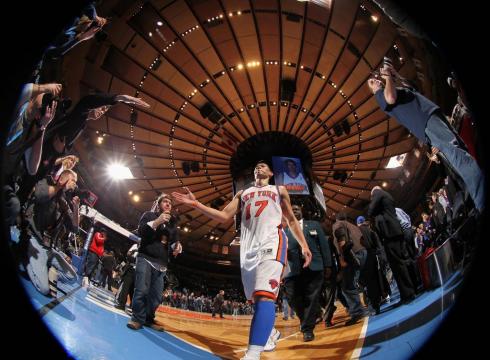 The U.S. media love an underdog story, but for better or for worse, they have been hyping up the facts that Lin is both Taiwanese American and a born-again Christian.

It’s fair to say that Americans are crazy about race and religion. And you can’t necessarily blame the media for drawing attention to those aspects of the Jeremy Lin story. Race and religion are controversial. Controversy sells newspapers. And this is New York City, the media capital of the United States.

But it was only a matter of time until the race issue heated up and the media were happy to fan the flames.

Floyd Mayweather tweeted on Tuesday: “Jeremy Lin is a good player but all the hype is because he’s Asian. Black players do what he does every night and don’t get the same praise.”

A barrage of coverage and debate ensued. For better or for worse.

Mayweather, and numerous other Lin critics are missing the point. So what if he’s Asian? What he has accomplished is remarkable, regardless of his race. Sure, it makes it more interesting that he’s the first American-born Asian to have this type of success in the NBA, but the Jeremy Lin story is compelling because his success was so unexpected.

He went from walking-on at Harvard to walking-on at the NBA, to being cut by two NBA teams in December, to being picked up by the Knicks on a temporary contract and sleeping on his brother’s couch to becoming an overnight NBA superstar.

My buddy Scott just texted me that ESPN.com‘s mobile site published an offensive, racially charged headline early this morning (about Lin and the Knicks’ loss last night to the Hornets), only to quickly remove it. ESPN has since issued an apology.

I don’t even know what to say to that, other than whoever wrote that headline is missing the point.

In the press conference following Tuesday night’s win over the Raptors, Lin again refused to take all the credit. “It’s not because of me,” he said. “It’s because we’re coming together as a team. We started making these steps, but we were still losing close games. But (now) we’re winning and we’ve been playing together. We’re playing better defensively and following our game plan. Coach D’Antoni and our coaching staff come up with an awesome game plan every single night.”

“Can you believe this is happening to you?” one reporter asked.

“No.” (The press room laughed.) “But I believe in an all-powerful and all-knowing God, who does miracles.”

Because he says things like that, a lot of people are quick to draw attention to Lin’s devout Christian beliefs. In many cases, people are comparing him to another vocally Christian athlete prone to late-game heroics, Denver Broncos quarterback Tim Tebow.

“Because he’s outwardly faithful and because of everyone’s tendency to use his name in puns, he’s drawing a lot of Tim Tebow comparisons,” Van Pelt noted. “Let’s stop right there. This guy’s not Tim Tebow.”

Forget about race and religion. Jeremy Lin is a great basketball player having a surprising amount of success at the highest level: in the NBA, playing in the biggest market in the U.S.

People need to just enjoy the story for what it is. He’s a nice kid and he’s playing well. The Knicks are winning and have become relevant again. It’s a tremendous underdog story that reinforces what many of us enjoy about sports.

And if you’re not into it, nobody is forcing you to watch. The rest of us are happy to tune in and watch the Linsanity continue to unfold.

Keep it up, J-Lin. The whole world is watching.

Allan is Schema’s J-Lin correspondent and a lifelong basketball fan. He lives in Vancouver and is incessantly taking photos of his food. And his sneakers. You can follow him on Twitter @poonisms.