Over dinner with my family a few weeks ago conversation turned to things we now see as ‘normal’ or an integral part of the every day, but that weren’t always like that. In my lifetime, cell phones are one example—at first it was something I saw on TV, then used by ‘business types’, then slowly integrating into families, until today, when it seems there are cell phones for toddlers (if not younger babies!). My parents had similar experiences with computers, whereas now everyone has a laptop, a desktop and a few other gadgets.

It seems taking things for granted is a big vice in our society, yet it also opens us up to new surprises. Take the upcoming New York photo exhibit by Fabrice Nadjari and Cedric Houin, who photographed Afghan residents who had never before seen a photograph! The juxtaposition of the first image in the larger context of the second is an interesting contrast. 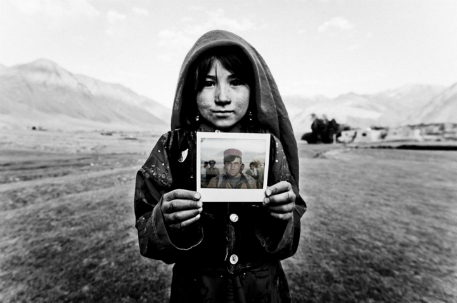 While many focus on looking at the colours, I was interested to see the facial expressions and body language of the subjects. The very first Polaroid seems to catch them off-guard. They are either staring blankly at the camera, or looking elsewhere. The second shot, where the subjects held their Polaroids, were much more posed. The subjects seemed to ‘know what to do’ as in ‘pose for the camera’. I wonder if they quickly learned ‘how’ to be photographed, or were more coached by the photographers? And going back to thinking of things taken for granted, do we also do this in expecting others to know how to behave in our culture, according to our norms?