Really Vancouver? Is this the direction our pride, our dignity and our self-worth as a city is crawling towards? I always liked to think Vancouver was different—Vancouver was the one place that, for the most part, made its name in everything Bravo’s Real Housewives TV hit is not about. Never did I see myself using the words ‘Vancouver’ and ‘real housewives’ in one sentence.

These were the thoughts that were strolling through my head as I secretly watched the latest episode of The Real Housewives of Vancouver. I think I may have found a new soft spot for hit reality TV shows ever since I wrote a piece on the Shahs of Sunset. But this time around, it wasn’t my Iranian self getting feisty about the type of content a show is conveying. Rather, it was my inner Vancouverite rising up to the occasion to see how his city is being whored around on primetime television.

The Real Housewives of Vancouver cast. Photo courtesy of ctv.ca

I guess I’m not entitled to pat myself on the back anymore for not being polluted with an episode of The Real Housewives of Somewhere since its birth in 2006.

Honestly, I see myself in the perfect position to passionately butcher and thoughtfully vomit on the show’s crummy plot lines. These plot lines are carried forth by a circle of shiny buffoons who, at the peak of their day, debate whether they should ‘waste’ their calories on a tasty appy during their five star brunch or save them for an evening cocktail. Housewife Christina was quoted saying, “The men I date are generally in the mining industry, which makes gold digging that much easier for me. I don’t need to carry a shovel.”

But I am not going to be too harsh because the material presented is something we are all too familiar with these days. Instead, I want to dedicate a strand of thought to how, in a picture perfect world, this show could change for the better. 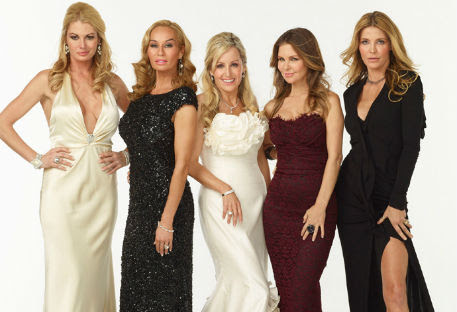 The irony in The Real Housewives is that its concept of ‘real’ is not so real to begin with. In fact, it is the furthest thing from real that you can imagine. The Vancouver version’s five stars—Reiko, Ronnie, Christina, Mary and Jody—are probably the most un-real women, or human beings for that matter, that I have ever encountered upon.

Would it be so bad to have the same show built around a circle of intellectually successful women—comprised of gifted doctors, novelists, lawyers and scientists—and have them bicker and peddle about whatever it is that they bicker and peddle about? Sure, the show would still not be very realistic, but at least its characters would be personalities to look up to, rather than ones to look down at and to ridicule.

Wouldn’t a show like that be profitable? Wouldn’t it be entertaining enough to pull in an audience of 1.2 million viewers for Slice TV, making it the most watched premier in its history (like The Real Housewives of Vancouver did)? Probably not. But at least our city, as the lone Canadian ambassador that chose to sell itself to such charades, would be able to keep an ounce of its dignity.

Mehran Najafi is a 5th year student, patching up his expertise in International Development studies in the University of British Columbia. He aspires to be a groovy writer, photographer, thinker, conspirator and DJ. Oddly enough, he likes to introduce himself as the meditative space that sits above the hyphen in ‘Iranian-Canadian’, but is frequently disappointed, as the people around him like to think otherwise. On his free time, he plays, laughs, spins, twirls, and jumps, up and down, down and up, round and round from one day to the next.