In an accusing gone empathetic interview of Paula Deen with host Matt Lauer on The Today Show, Paula makes a final note in her cry:

“If there’s anyone out there that’s never said something that they wish they could take back, if you’re out there then pick up that stone and throw it so hard at my head that it kills me,” making reference to the biblical story of a woman who is confronted by a raging crowd that intends to pursue the death penalty for adultery through stoning. Jesus interrupts the scene and eases the intensity of the arena by writing on the ground with his finger, “let him who is without a sin cast the first stone.”

The interview has sought an array of attention from media critics, as Paula delves off into a whirlwind, begging for the public’s forgiveness. The reason?

For those, like myself, who have no place in the kitchen and are unwary of T.V. chef personalities—let’s tread back to her initial emergence:

In 1996, The Bay Lady, a small-scale home-based catering business in Georgia, is where Paula Deen first showcased her knack for brewing up all that is deadly and delectable. As it goes when a woman tickles the hearts of American foodies, Deen was bound to upgrade. However, the media urged her to take it into the realms of the limelight, foregoing her new café. She didn’t resist the bombardment of invites from renowned American shows, publishers, or endorsement agencies. Not only was she soon admitted into Food Network, she was featured on Oprah, and partnered with Caesars Entertainment, Walmart, QVC, and many other big names. 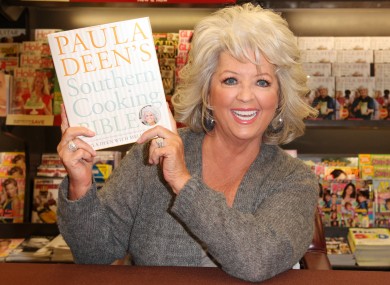 She escalated with four published recipe books, an Emmy Award and, according to Forbes in 2012, was named the 4th top-earning celebrity chef with an estimated $17 million under her apron. What caused “The Paula Deen Empire,” as put by New York Times, to come to a crumbling?
By being accused of bigoted behind-the-scenes behaviour towards her employees and racist tendencies. Most controversially, she has been slammed for admitting under oath for using the N-word in a “non-mean way.” Adding to the burden of a lawsuit and her termination from Food Network, too many other companies who, initially, were overtly keen to feature her are now just as eager to let her go.

A wave of critics have been nitpicking down to every second of this interview, in attempts to reveal its very depths. Most accuse her plead for forgiveness solely as a scheme for salvaging her empire. Others, such as Stuart Muszynski of Huffington Post, make note that America has come to forgive Tiger Woods, Lance Armstrong, and “Congressional leaders everyday for partisanship, incivility and not doing their job, although they’re noticeably unrepentant and their transgressions are more recent. So why not a seemingly repentant Paula Deen?”

Taking a stand against racism and defending offensive subjection is necessary on all accounts, and is by all means heroic. However, is it not contradictory for social justice advocates to own up to their own power-trip by discriminating an individual’s mistakes to the point of despair and desperation?

As the career of a T.V. personality with a past of praise and success goes awry, what would be the most appropriate way for her to respond way to the rise of hate speech? If she scurried behind the curtains in avoidance of the persisting camera men, she would be accused of not only racism, but of cowardice. Assessing the degree of sincerity in her apology is irrelevant. If Paula Deen were a dictator, she should be spared zero sympathy, but I think it would be fair to give voice to the people she offended, learn from her “mistakes” while being conscious of our own, and give her some slack. ChangeLab offers some unyielding advice to offer Paula Deens of the future, check out the list!